The Ministry of Home Affairs is pleased to provide a further update and share photos of the Deputy Premier and Minister of Home Affairs, the Honourable Walter Roban, JP, MP, activities at the UN Climate Change Conference in Glasgow Scotland.

On Thursday, Minister Roban and the UK Overseas Territory (UKOT) delegations met with Mr Marc VANHEUKELEN, Ambassador at Large for Climate Diplomacy at the European External Action Service (EEAS). In the meeting, they discussed maintaining a sustainable relationship with the EU post-Brexit and the options for scientific, advisory and development support on environmental matters.

Later that day, the Minister attended the CARICOM pavilion, where he had the opportunity to meet Gene Leon, President of the CDB. Following this meeting, the Caribbean Community Climate Change Centre's Executive Director, Dr Colin Young, and Head of Project Development, Mr Keith Nicols, briefed the UKOT delegation focusing on the latest developments on the Paris Agreement and CARICOM's position on the matter. Towards the end of the day, Minister Roban attended the Alliance of Small Island States Pavillon and discussed Affordable Finance for Clean Energy In the SIDS Template for a New Approach.

On Friday, Minister Roban met with the US White House Advisor, Gina McCarthy, and briefed her on Bermuda's effort to address the issue of Climate Change through mitigation and environmental protection efforts. Discussions revolved around the Bermuda Ocean Prosperity Programme initiative, the Regulatory Authority of Bermuda's Integrated Resource Plan, and work being done by the Bermuda Institute of Ocean Sciences and NASA.

"In the meeting with Mrs McCarthy, I expressed Bermuda's willingness to support the US on several climate action initiatives they have ongoing," said Minister Roban. "We also discussed Bermuda's involvement in the White House Greening Government Initiative and the islands own 'greening initiatives."

"It was also the perfect opportunity to discuss how the US might assist Bermuda in the protection, observation, surveillance and management of our Exclusive Economic Zone. I also elaborated on our work to build sustainable fisheries, renewable energy and sustainable Blue Tourism. I found Ms McCarthy keenly interested in Bermuda, and she supported our pursuit of renewables, offshore floating wind and solar energy initiatives, as well as the Climate Risk Finance project."

"Ms McCarthy expressed her commitment to looking into the matters raised to support Bermuda's efforts that are in line with the US Government's own climate action plans and objectives. After our meeting. I presented Mrs McCarthy with a Bermuda lapel pin as a symbol of goodwill."

Minister Roban also had the opportunity to hear the presentation by the Minister of Environment for Belize and the country's journey REDD Plus and meet fellow Bermudian Elizabeth Chiappa of Humana Spain, who was also participating in the event.

On Saturday, in the UK Pavilion, the highlight of Bermuda's involvement in COP26, Nature Day, was held. Minister Roban led an event entitled "Our Vision for Healthy Oceans" that was thematically focused on raising awareness, protecting our oceans and how the Overseas Territories are taking action against climate change. Also featured throughout the day will be a video collaboration of all the Overseas Territories.

Reiterating the need to address climate change to those in attendance, Minister Roban said, “Governments of the UK’s Overseas Territories are custodians of internationally important habitats which span the globe; from the Antarctic to the Caribbean, the Indian Ocean to the Pacific. All Territories are on the front line of the impact of climate change as vulnerable small island states. Overseas Territory Governments are at the forefront of work on renewable energy, nature-based solutions; adaptation and resilience, ocean protection, and climate finance.”

“Together, the UK Territories represent the world’s fifth-largest marine estate and over 90% of the UK’s biodiversity. We are vital to the UK meeting its pledge by 2030 to protect 30% of the world’s oceans.”

The event was live-streamed and is available to view at https://youtu.be/X8keWKNrTb0.

During the event, Minister Roban met the UK Minister for the Pacific and the International Environment, RT Hon. Lord Zac Goldsmith, who later, referencing the UKOTA, tweeted, “What these leaders are doing is simply heroic. Our overseas territories are protecting an area of water bigger than India. It’s one of the best Conservation wins of my generation.”

During the latter part of the day, Minister Roban met with the President of the Caribbean Development Bank, Dr Gene Leon, and his executive team to foster closer relationships and support for Caribbean Overseas Territories. He also participated in interviews with BBC and Hub Culture.

"As demonstrated in Friday's Speech from the Throne, the Economic Recovery Plan, and our participation in COP26,” said Minister Roban, “the Bermuda Government remains committed to protecting our environment. The introduction of a Marine Development Act will include a marine spatial plan identifying the 20% protected area of Bermuda's Exclusive Economic Zone. The Act will also create a framework to balance development and sustainability, providing an application process for the investment in fishing, offshore renewable energy and "blue tourism. The process will guide the management of ocean uses across the EEZ, drawing on local expertise and utilising an environmental impact procedure akin to the Bermuda Plan for land development." 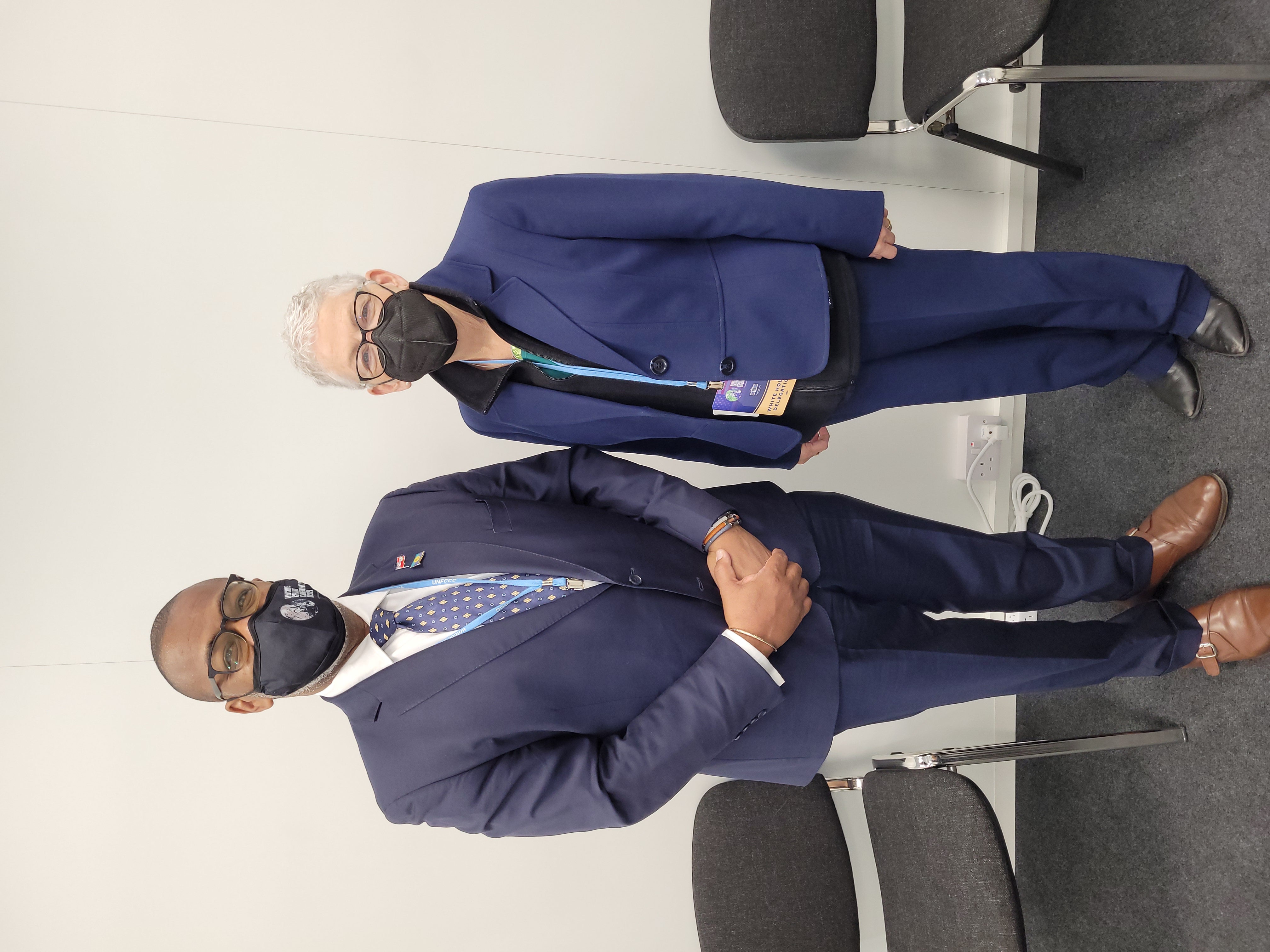 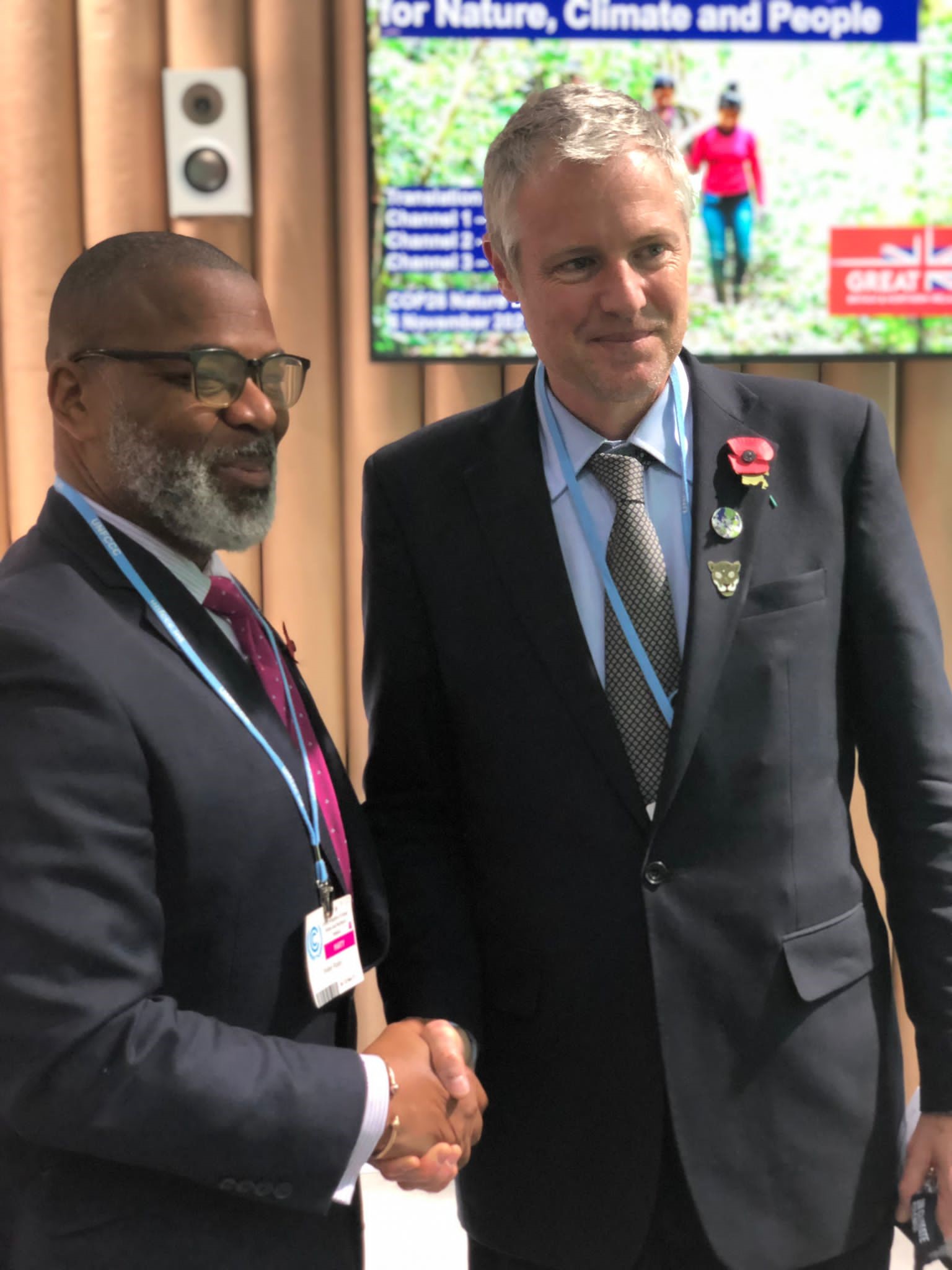 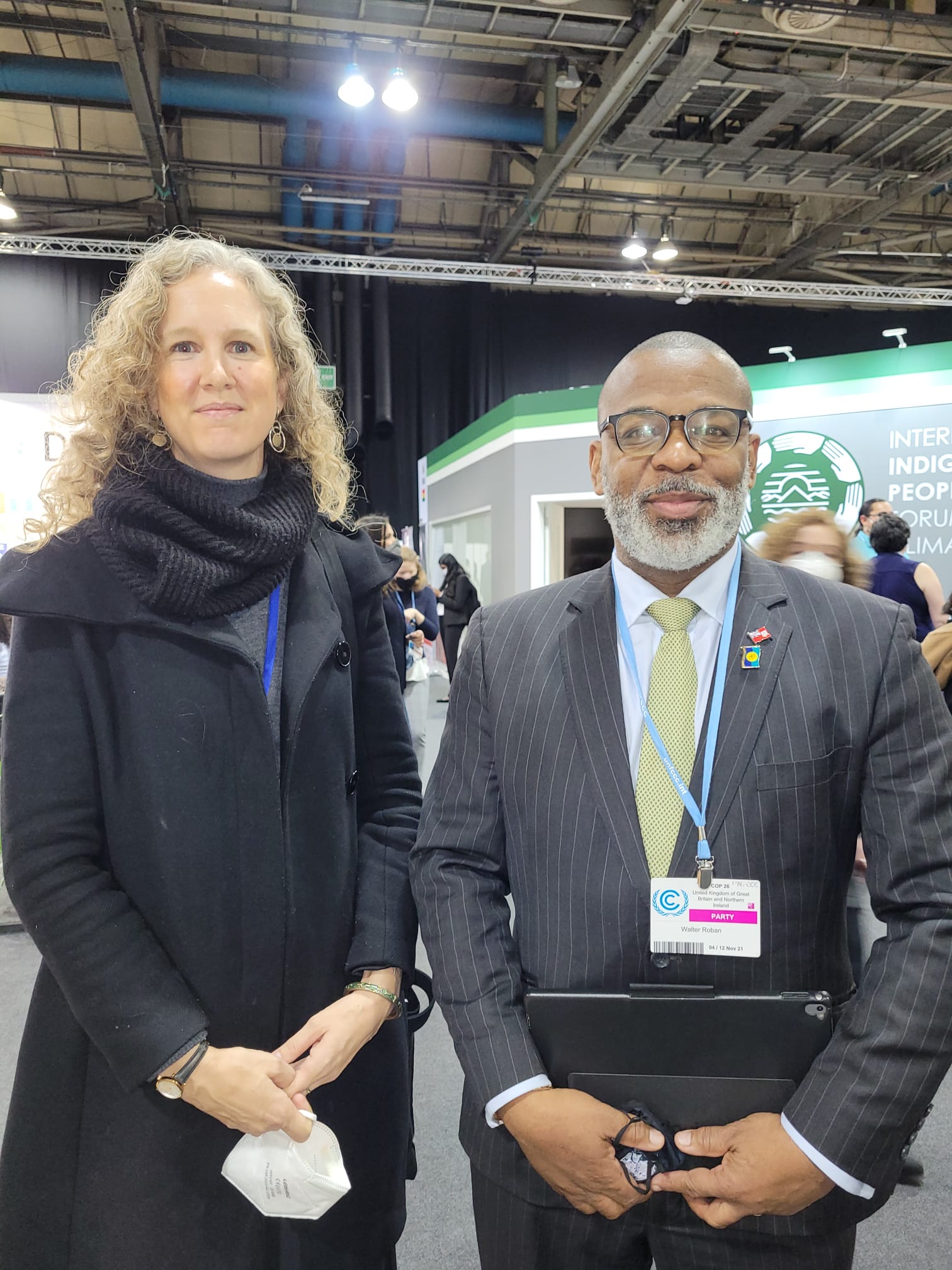