The Ministry of Finance today reported on the 2019/20 First Half Fiscal Performance and provided an updated Economic Review for 2019.  Highlights include:

The headline numbers for the 2019/20 National Budget are as follows: a revenue target of $1.12 billion; current expenditure of $1.05 billion, including debt service; capital expenditure of $64.7 million; and a projected surplus of $7.4 million.

Revenues for the six months ending September 2019 are $545.4 million; this is $7.8 million (1.4%) higher than in September 2018.  It should be noted that the increase in revenue is due to a larger collection in Customs Duty, Payroll Tax, Foreign Currency Purchase Tax, Telecommunication Receipts and Passenger Tax which are offset by lower receipts in Land Tax, Hotel Occupancy Tax, Stamp Duty, Civil Aviation Receipts and All Other Receipts.

In general total revenues are tracking slightly below budget estimates, however the strength in Payroll Tax and Passenger Tax receipts increases the chances of meeting the total revenue target for the current fiscal year.

Current expenditures, excluding debt service, are presently tracking 0.05% or $0.2 million below budget estimates. It should be noted that in certain instances expenditures are not made evenly over the year which may distort actuals when compared to budget;. The $463.7 million spent in the first six months of 2019/20 represents approximately 49.9% of the total current account budget of $929.9 million and are over $200,000 less than the first six months of 2018/19.

Capital expenditures for the period ending September 2019 are $4.4 million higher than in September 2018. This is primarily due to a new capital grant for WEDCO to develop King’s Wharf and various other on-going Ministry of Public Works development projects.

Interest expenses are tracking 5.8% or $3.4 million lower than 2018.  This is due to lower debt levels and strategic Asset/Liability Management by the government in which relatively expensive debt has been refinanced by less expensive debt.

For the first six months of 2019/20 Government incurred a deficit of $7.6 million, compared to a deficit of $46.8 for the corresponding period in 2018/19. This deficit was financed by a Credit Facility with a local financial institution.

The Caroline Bay project will result in the Government incurring additional interest expenses of approximately $4.0 million in this fiscal year and other expenses relating to professional services and the amount owed to contractors and sub-contractors associated with this project.

The increase in borrowing runs counter to the plan that was outlined in this Government’s budget statement in February which stated that we had no plans to incur any additional long-term borrowings in this fiscal year. While this turn of events was unplanned, the Government’s commitment to being prudent stewards of the public purse remains unchanged.

*Comparative data over the first half of 2019, except when otherwise indicated.

Over the course of 2019, the economy has experienced a shift in the outcomes of a few of the indicators when compared to 2018. This year air arrivals are down after experiencing a revival over the last few years and imports and employment income have grown after declining last year. However, total visitor numbers, construction levels and the low level of inflation continue to have a positive effect on the economy. Conversely, retail sales and international company registrations continue to offset the positive aspects of the economy. Throughout the economic swings, the Government continues to make a concerted effort to stimulate domestic spending and foreign investment in Bermuda through targeted investment strategies and diversification of business development initiatives. This should lead to higher employment numbers providing sustained economic growth in most sectors. 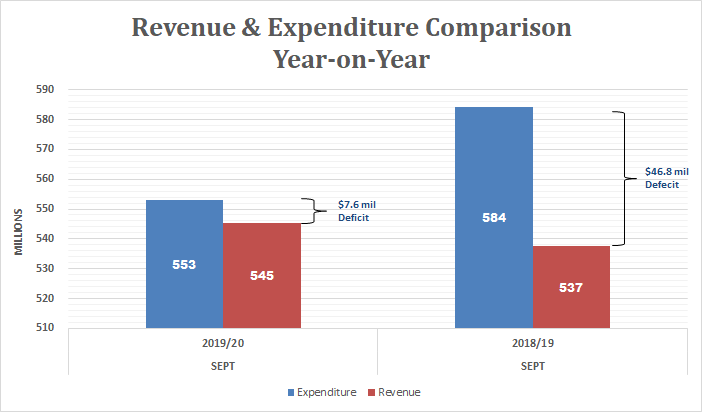 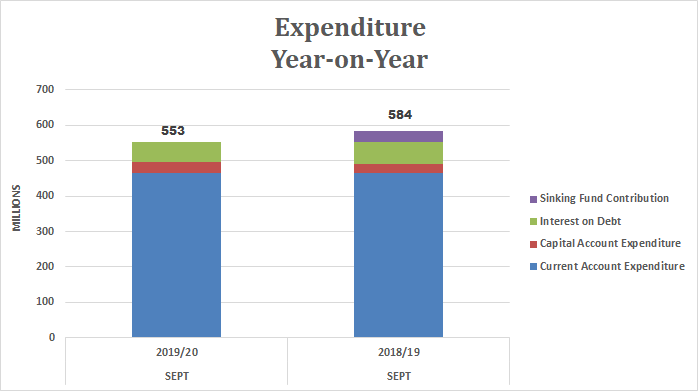 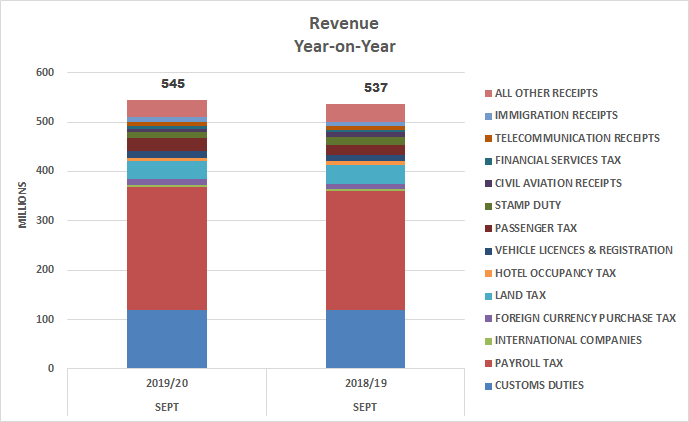