Good Afternoon and thank you for being here.

I really enjoy it when I can deliver good news - and today - I get to do just that. As most of you know I thrive on seeing Bermudians succeed and when I have an opportunity to promote such, it is that much more rewarding. Today, I have the privilege of sharing some of our most recent appointments and promotions – in this case – 4 Bermudians trained to fill key roles within the Ministry of Public Works.

First up is our new Chief Surveyor, Mr. Steven Conway. The Chief Surveyor heads the Department of Public Lands & Buildings within the Ministry. Steve is a member of the Royal Institution of Chartered Surveyors and brings over 40 years’ experience in the management of lands and buildings. He worked for the Bermuda Housing Corporation for 12 years and later served as property manager for the Bermuda National Trust. He joined the Ministry of Public Works 5 years ago as a Senior Estates Surveyor. While Steve has acted in the position of Chief Surveyor on many occasions, he consistently performed at a high standard - thus making the decision to appoint him to the substantive post an easy one. He succeeds another Bermudian, Mr. Chris Farrow who has been promoted to Permanent Secretary – currently posted to the Ministry of Labour, Community Affairs & Sport.

Three years ago, on August 21st, 2016 a Chief Engineer was hired - his name is Yves Lortes, or ‘Bob’ as he is more commonly known. At the outset - Bob had a very clear self-imposed mission - to identify and train a Bermudian to succeed him upon his departure, 3 years later! So with that mission - I declared him “my favorite foreigner!” Let me just say, not only did he identify someone to fill his post – he trained, mentored and prepared him, but he did the same for so many others as well throughout the department. Let me also state for the record that Bob was always crystal clear that he would have a Bermudian ready and he would not stay in post one day past his 3-year contract - he was true to his word, handing over the reins on August 21st, 2019. Oh, to have that be the norm for guest workers!

His successor as Chief Engineer is Mr. Kirk Outerbridge, who holds a degree in Mechanical Engineering as well as a Professional Engineering Designation. Kirk was the Plant Manager at Tynes Bay Waste to Energy Facility for the better part of the last 12 years and was quickly identified as Bob’s successor. Since 2016 he has also been the Assistant Chief Engineer. Bob said after just a few weeks in Bermuda, it was obvious that Kirk had everything necessary to be the Chief Engineer. He stated that Kirk was a natural leader and technically very strong. As a Chief Engineer, you must be very open-minded and even more so, very curious and he states that Kirk is both of those. He also stated that Tynes Bay, which was opened in 1993, could be at the end of its life expectancy, but due to Kirk’s management, leadership and the dynamic team there, it is maintained so well and continues to run efficiently. During his term at Tynes Bay Kirk introduced a power engineering training program, created a solid waste contingency system for the island and acted as the owner’s representative/project manager for the installation of a new turbine generator……and those are just a few of his achievements, so needless to say, he is the best choice for our new Chief Engineer.

So, now having created a gap at Tynes Bay – Bob set about finding someone to fill that gap. He soon identified Mr. Nasir Wade, to succeed Kirk as the new Plant Manager at Tynes Bay Waste to Energy Facility - who has seamlessly taken over the management of the plant and stepped into the post left vacant by Kirk’s promotion. Nasir, having obtained both Bachelor’s and Master’s degrees in Mechanical Engineering from Howard University, accepted a position as Project Engineer with the United States Federal Government in their Central Heating and Cooling Power Plant, in Washington, D. C. He gained invaluable experience, skills, and training as a Project Engineer. In 2013, he returned to Bermuda to fulfill the role of Maintenance Engineer at the Tynes Bay Waste to Energy Facility. In his 6 years at the Facility, Nasir has successfully managed numerous capital works projects, decreased unplanned downtime and initiated strategic required maintenance, resulting in fewer emergency repairs. At present, Nasir is managing the installation of a new preventative maintenance system which will transform and modernize the way in which the work at the plant is managed and increase and improve plant efficiency. A natural successor to Kirk at Tynes Bay.

This now brings me to Bob’s final Bermudian recruit, the new Principal Mechanical Engineer at the Quarry, Mr. Abayomi Carmichael. Abayomi joined us in July of this year succeeding a guest worker who has returned to his native Wales. He previously was Vice President of Risk Management & Analysis for the Ascendant Group Ltd. He holds a Bachelor’s Degree in Electrical Engineering and a Master’s Degree in Business Administration. His first mandate at the Quarry is modernizing maintenance strategies for the 600 vehicles under our remit. He also has far more complex, long term goals to modernize and upgrade the facility and staff.

Each one of these individuals are living examples of what can happen if we invest and believe in the capabilities of Bermudians. We can train them to fill all manner of posts and yes, that also means that we may have to utilize the expertise of an experienced expatriate to get them where they need to be, with the ultimate goal always being to provide opportunities for Bermudians. I will continue to highlight these success stories for the very reason that in the Ministry of Public Works, there are many more to come - a number of our star summer students are right now working towards degrees in Engineering, Project Management, and Architecture…….so, we will be showcasing stories of success for years to come.

Let me warmly congratulate all four team members on their appointment to these new positions – wish them well in their careers and encourage them to follow the example applied to them – on their journey to help other Bermudians achieve their full potential too.

I will now call upon each of them, in turn, to give a few remarks – so that the people of Bermuda can hear directly from them. 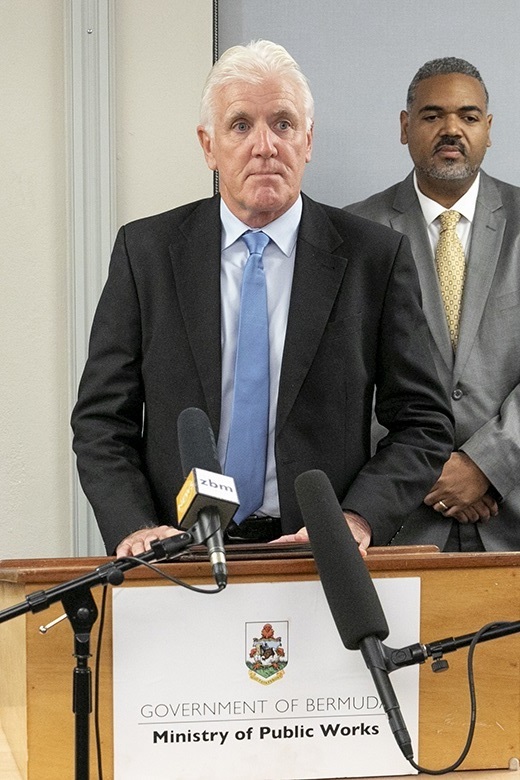 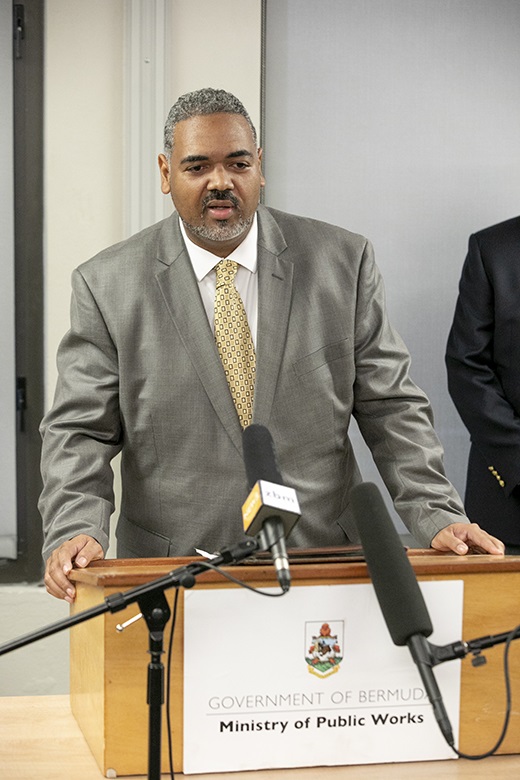 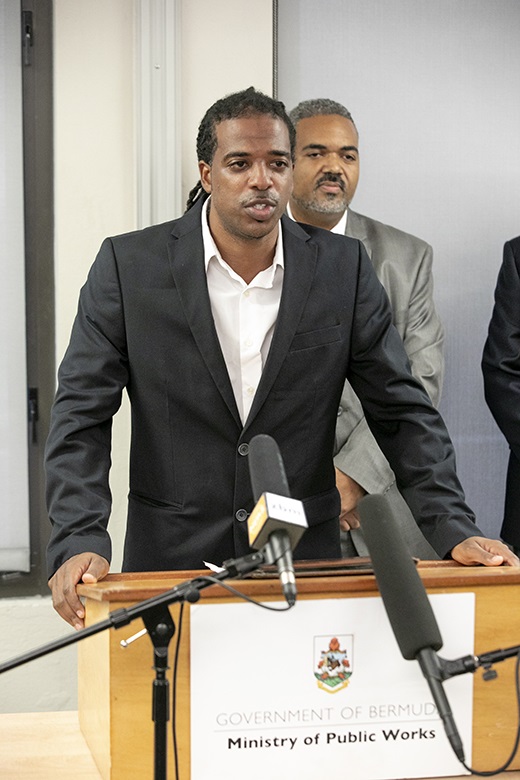 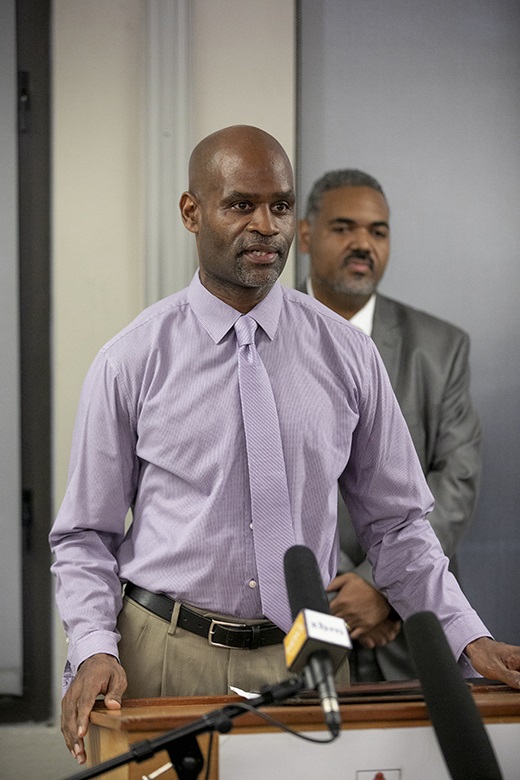